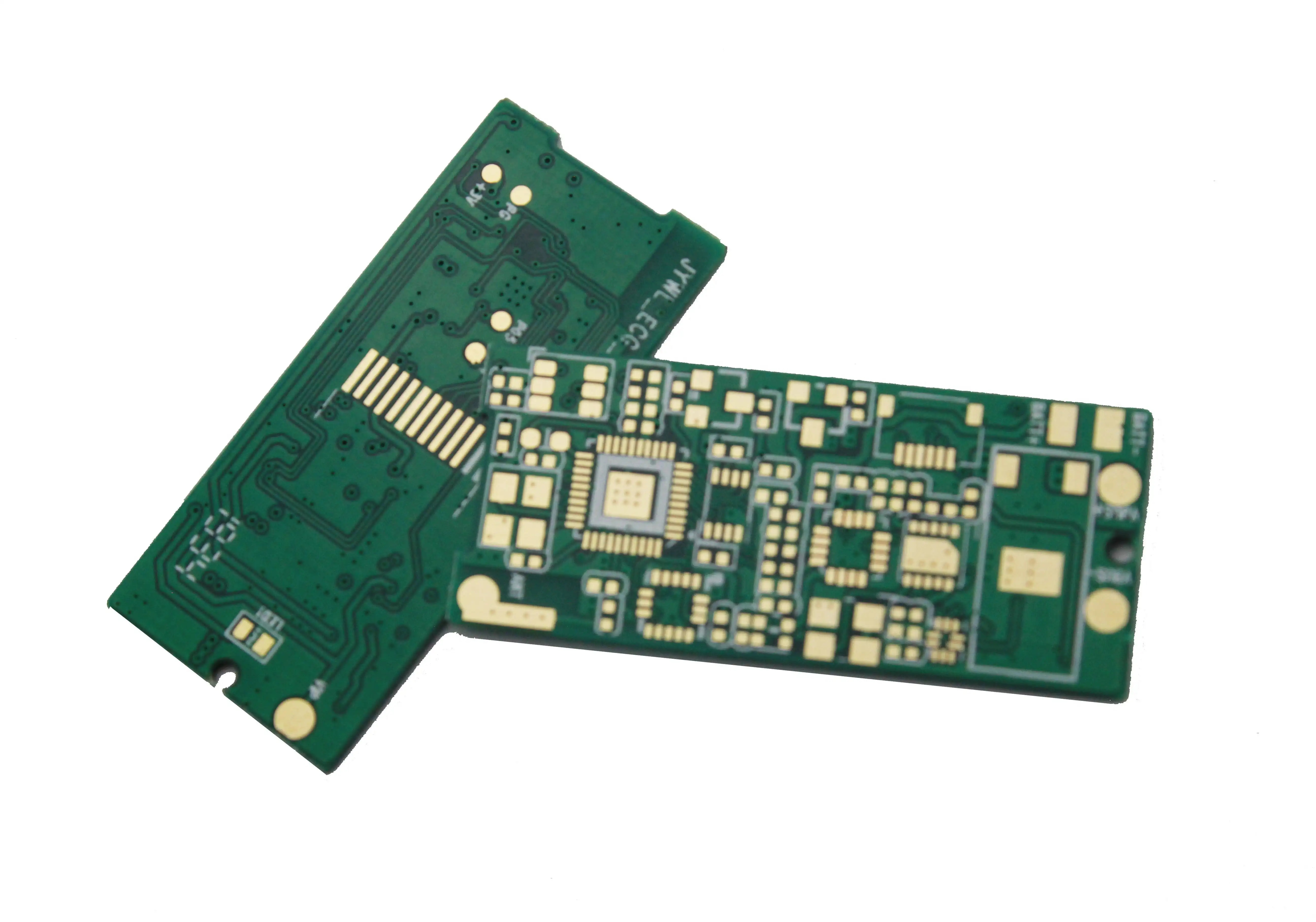 1. How to select PCB materials?

For the selection of PCB boards, a balance must be achieved between meeting the design requirements, mass production and cost. The design requirements include electrICal and mechanical parts. In general, when designing very high-speed PCB boards (frequencies greater than GHz), this material problem is more important. For example, among the commonly used FR-4 materials, the dielectric loss at several GHz frequencies will greatly affect the signal attenuation, which may not be applicable. As far as electricity is concerned, we should pay attention to whether the dielectric constant and dielectric loss are used at the designed frequency.

2. How to avoid high-frequency interference?

3. In high-speed design, how to solve the problem of signal integrity?

4. How is the difference distribution line realized?

There are two points to pay attention to in the wiring of differential pairs. One is that the length of two lines should be the same as far as possible, and the other is that the distance between two lines (this distance is determined by differential impedance) should always remain unchanged, that is, it should be kept parallel. There are two parallel ways. One is that two lines walk on the same side by side, and the other is that two lines walk on the upper and lower adjacent layers. Generally, the former has many side by side implementations.

5. For the clock signal line with only one output terminal, how to realize the difference distribution line?

6. Can a matching resistance be added between differential line pairs at the receiving end?

The matching resistance between differential line pairs at the receiving end is usually added, and its value should be equal to the value of differential impedance. This will improve the signal quality.

7. Why should the wiring of differential pairs be close and parallel?

8. How to deal with some theoretical conflicts in actual wiring

Basically, it is right to divide and isolate analog/digital signals. It should be noted that the signal wiring should not cross the moit, and the return current path of the power supply and signal should not become too large.

The crystal oscillator is an analog positive feedback oscillation circuit. In order to have a stable oscillation signal, the specifications of loop gain and phase must be met. The oscillation specifications of this analog signal are very easy to be interfered. Even if ground guard traces are added, the interference may not be completely isolated. Moreover, if it is too far away, the noise on the ground plane will also affect the positive feedback oscillation circuit. Therefore, the distance between the crystal oscillator and the chip must be as close as possible.

Indeed, there are many conflicts between high-speed cabling and EMI requirements. However, the basic principle is that some electrical characteristics of the signal cannot meet the specifications due to the resistance capacitance or ferrite beam added by EMI. Therefore, it is better to solve or reduce the EMI problem by using the techniques of routing and PCB stacking, such as high-speed signal routing to the inner layer. Finally, use resistance capacitor or ferrite bead to reduce the damage to the signal.

9. How to solve the contradiction between manual wiring and automatic wiring of high-speed signals?

Most automatic routing devices with strong routing software now have set constraints to control the winding mode and the number of vias. The setting items of winding engine capacity and constraints of various EDA companies are sometimes far from each other. For example, whether there are enough constraints to control the way of serpentine winding, and whether the distance between differential pairs can be controlled. This will affect whether the routing method of automatic routing can conform to the designer's idea. In addition, the difficulty of manually adjusting the wiring is also absolutely related to the ability of the winding engine. For example, the pushing ability of routing, the pushing ability of vias, and even the pushing ability of routing to copper coating, etc. Therefore, the solution is to choose a router with strong winding engine.

The test coupler is used to measure whether the characteristic impedance of the PCB produced meets the design requirements with TDR (Time Domain Reflectometer). Generally, the impedance to be controlled includes single wire and differential pair. Therefore, the routing line width and line spacing (in case of differential alignment) on the test coupler should be the same as the lines to be controlled. The most important is the position of the grounding point during the measurement. In order to reduce the inductance of the ground lead, the place where the TDR probe is grounded is usually very close to the place where the signal is measured. Therefore, the distance and method between the measuring signal point on the test coupler and the grounding point should conform to the probe used.

11. In the design of high-speed PCB, the blank area of the signal layer can be coated with copper, and how should the copper coating of multiple signal layers be distributed on the grounding and power supply?

12. Is it possible to use the microstrip line model to calculate the characteristic impedance of the signal line above the power plane? Can the signal between the power supply and the ground plane be calculated using the stripline model?

Yes, both the power plane and the ground plane must be considered as reference planes when calculating the characteristic impedance. For example, the four layer board: top layer - power layer - stratum - bottom layer. At this time, the model of the characteristic impedance of the top layer wiring is the microstrip line model with the power plane as the reference plane.

13. Can test points automatically generated by software on high-density printed boards meet the test requirements of mass production in general?

14. Will adding test points affect the quality of high-speed signals?

Whether it will affect the signal quality depends on the way of adding test points and how fast the signal is. Basically, the additional test points (not the online existing via or DIP pin as the test point) may be added to the online or pulled out from the online for a short length of line. The former is equivalent to adding a SMAll capacitor on line, while the latter has an extra branch. Both of these two conditions will affect the high-speed signal more or less. The degree of influence is related to the frequency speed of the signal and the edge rate of the signal. The magnitude of the impact can be known through SIMulation. In principle, the smaller the test point, the better (and of course, meet the requirements of the test machine). The shorter the branch, the better.

15. Several PCBs constitute the system. How should the ground wires between the boards be connected?

When the signal or power supply between the interconnects of PCB boards acts, for example, if board A has power or the signal is sent to board B, there must be an equal amount of current flowing back from the stratum to board A (this is Kirchoff current law). The current in this stratum will flow back to the place with the lowest impedance. Therefore, the number of pins allocated to the formation at each interface, whether the power supply or signal is connected, cannot be too small to reduce impedance, which can reduce the noise on the formation. In addition, it is also possible to analyze the entire current loop, especially the part with large current, and adjust the grounding method of the stratum or ground wire to control the current path (for example, make a low impedance at a certain place to let most of the current flow from this place), so as to reduce the impact on other sensitive signals.

16. Can you introduce some foreign technical books and data on high-speed PCB design?

Nowadays, high-speed digital circuits are used in communication networks, calculators and other related fields. In terms of communication network, the working frequency of PCB board has reached GHz, and the number of layers is up to 40 as far as I know. Due to the progress of the chip, the highest working frequency on the board of a general PC or server has reached more than 400MHz (such as Rambus). In response to the demand for high-speed and high-density routing, the demand for blind/buried vias, mirrovias and build up processes is also increasing. These design requirements can be mass produced by manufacturers.

18. Can a ground wire be added in the middle of the differential signal line?

19. Does rigid flexible plate design require special design software and specifications? Where can we undertake such PCB processing in China?

Flexible printed circuit can be designed with general PCB design software. It is also produced by FPC manufacturers in Gerber format. Because the manufacturing process is different from the general PCB, each manufacturer will determine the minimum line width, minimum line spacing, minimum aperture (via), etc. according to their manufacturing capacity. In addition, copper sheet can be laid at the turning point of the Flexible circuit board for reinforcement.

20. The principle for properly selecting the grounding point of PCB and housing is as follows:?

The principle for selecting the grounding point between PCB and housing is to use the chassis ground to provide a path with low impedance to return current and control the path of return current. For example, usually near the high-frequency device or clock generator, the PCB layer can be connected to the chassis ground by using the fixing screws to minimize the area of the entire current loop, that is, to reduce electromagnetic radiation.

What principles should PCB layout design of circuit board factory follow