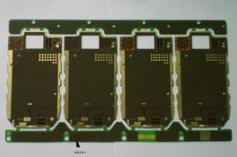 How to distinguish the number of layers of pcb multilayer board

The 4 layers of the board are the 1st and 4th layers for wiring, and the other layers are used for other purposes (ground wire and power supply)

The auxiliary signal layer is added to layer 6 and 8

The base plate of PCB itself is made of insulating and heat-insulating materials that are not easy to bend. The SMAll circuit material that can be seen on the surface is copper foil. Originally, the copper foil was covered on the entire PCB, but some parts were etched during the manufacturing process, and the remaining parts beCAMe retICular small

The line is up. These lines are calLED wires or wiring, and are used to provide circuit

connection of parts on PCB. Usually, the color of PCB is green or brown, which is the color of solder resist paint. It is an insulating protective layer, which can protect copper wires and prevent parts from being welded to incorrect places.

Now the motherboard and the graphics card are all multilayer boards, which greatly increases the area of PCB wiring. More single or double sided wiring boards are used for Multilayer boards, and a layer of insulating layer is placed between each layer of boards and then pressed together. The number of layers of a PCB board represents several independent wiring layers. Usually, the number of layers is even and includes the outermost two layers. Common PCB boards are generally 4-8 layers. The number of layers of many PCB boards can be seen by viewing the section of pcb board. But in fact, no one can have such good eyesight. So, let's teach you another method.

The circuit connection of multilayer boards is through the buried hole and blind hole technology. The motherboard and display card mostly use 4-layer PCB boards, while some use 6-layer, 8-layer, or even 10 layer PCB boards. To see how many layers a PCB has, you can identify them by observing the pilot hole. Because the four layers of boards used on the motherboard and display card are the first and fourth layers of wiring, and the other layers are used for other purposes (ground wire and power supply). Therefore, like the double-layer board, the pilot hole will pierce the PCB board. If some pilot holes appear on the front of the PCB, but cannot be found on the back, it must be 6/8 layers. If the same pilot holes can be found on both the front and back of a PCB, it is naturally a 4-layer board.

Tip: Hold the main board or display to the light source. If the position of the guide hole can transmit light, it means it is a 6/8 layer board; On the contrary, it is 4-layer plate.

PCB is short for print circuit board. That is, printed circuit board. The conductive copper sheet is attached to the base plate of the insulating material for circuit connection. These circuit connections can be on the front, back, or even in the middle of the substrate. Generally, PCB with circuit layers larger than 2 layers (i.e. front and back) is called multilayer board.

Professional PCB manufacturers and PCB design and solution service providers focus on the development of PCB industry and are trustworthy.

Describe the meaning of TG symbol in pcb sheet