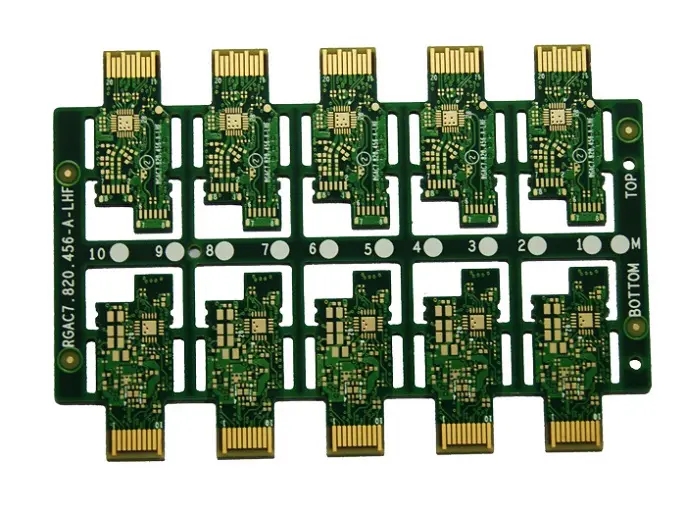 ENIG Surface Treatment of Circuit Board and Its Advantages and Disadvantages

ENIG Surface Treatment of Circuit Board and Its Advantages and Disadvantages

Compared with electroplated nickel gold, this kind of nickel leaching gold does not need to be electrified on the circuit board in the process of the circuit board factory, nor does it need to pull a wire on each pad to be electroplated for nickel gold plating. Therefore, the process is relatively SIMple, and the output is more than a multiple, so the production cost is relatively cheap.

However, ENIG surface treatment also has its shortcomings and problems. For example, the low welding strength and the easy generation of black pads are also often criticized.

The production process of chEMIcal nickel gold is roughly as follows:

Chemical nickel: Ni/P, which is mainly used to block migration and diffusion between copper and gold, and as an element that reacts with tin to form IMC during subsequent welding.

Gold DIP plating: the main purpose of gold is to protect and prevent the oxidation of nickel layer. Gold does not participate in chemical reaction during soldering. Too much gold will hinder the strength of soldering tin, so gold can only cover the nickel layer so that it is not easy to be oxidized. If it is necessary to make COB (Chip On Board) wiring, it is another matter, because the gold layer must have sufficient thickness.

Advantages of ENIG surface treatment of circuit board:

The surface treatment can be used as the base metal for COB wiring.

1. Reflow can be repeated for many times. Generally, it is required to withstand at least three times of high temperature welding, and the welding quality can be kept consistent.

2. It has excellent conductivity. It can be used as a gold finger line for key conduction, and has high reliability.

3. Gold metal has low activity and is not easy to react with the components in the atmOSPhere, so it can play a certain role in anti oxidation and anti rust. Therefore, the storage life of ENIG can easily exceed six months. Sometimes, even if it is stored in the warehouse for more than one year, the circuit board can still be used for welding production as long as it is in good storage condition and free of rust, and the circuit board is confirmed to be OK after baking, dehumidification and solderability test.

4. Gold is not easy to oxidize when exposed to the air, so a large area of bare pad can be designed for "heat dissipation".

5. It can be used as the contact surface of blade plate. The gold coating for this application must be thicker. Hard gold plating is generally recommended.

6. The surface of ENIG is flat, the flatness of printing solder paste is good, and it is easy to weld. It is very suitable for thin leg parts and SMAll parts, such as BGA, Flip chip and other parts.

Disadvantages of ENIG surface treatment of circuit board:

1. In general, the strength of Ni3Sn4 solder joints is not as strong as Cu6Sn5. Some parts with special requirements for welding strength may be unable to withstand excessive external impact force, which may lead to the risk of falling.

2. Because the price of "gold" is rising, the cost is relatively higher than that of OSP surface treatment.

There is a risk of "black pad" or "black nickel". Once the black pad is generated, the strength of the solder joint will drop rapidly. The black pad is composed of complex NixOy chemical formula. The basic reason is that the nickel surface is subject to excessive oxidation reaction (the metal nickel is free to become nickel ion, which can be broadly referred to as oxidation) when the nickel surface is subject to immersion replacement reaction, and then the irregular deposition of large gold atoms (the radius of gold atoms is 144pm) forms a rough and porous grain arrangement, which means that the "gold" layer cannot completely cover the "nickel" layer underneath, Let the nickel layer have the opportunity to continue to contact with the air, and finally gradually form nickel rust under the gold layer, eventually causing welding obstacles. The existing "ENEPIG" process can effectively solve the problem of "black pad", but because its cost is relatively expensive, it is still only used by high-grade boards, CSPs or BGA manufacturers.

Function and Operation Procedure of Bottom Filler in PCB Production