The basic rules of wiring in PCB design are as follows

In PCB design, wiring is an important step in product design. The wiring design process is the most rigorous, with the best skills and the largest workload. It can be said that the previous preparations have been completed. PCB layout is divided into three types: single-sided wiring, double-sided wiring and multi-layer wiring. PCB layout can be completed using automatIC and manual routing provided by the system. Although the system provides designers with easy operation and high routing rate of automatic routing, there are still unreasonable places in the actual design. At this point, the designer needs to manually adjust the wiring on the PCB for best results.

2. When wiring on both sides, the conductors on both sides should be perpendicular, skewed or bent to avoid being parallel to each other to reduce parasitic coupling.

3. PCB should use 45 ° polyline instead of 90 ° polyline to reduce the coupling between external transmission and high-frequency signal.

4. As the input and output of the circuit, printing wires should be avoided as far as possible to avoid backflow, and it is better to add grounding wires between these wires.

5. When the wiring density on the board is large, mesh copper foil shall be filLED, and the mesh size is 02mm (8mil).

6. The patch pad cannot be placed through the hole to avoid the loss of solder paste caused by component solder joints.

7. It is not allowed to transfer important signal lines between sockets.

8. Avoid stepping holes under horizontally installed resistance, inductance (insertion), electrolytic capacitor and other components to avoid short circuit between the hole and the component shell after peak welding.

10. The signal line shall not have loopback wiring. If there must be a loop, the loop shall be as SMAll as possible.

11. When the wiring passes between two pads but is not connected to them, they should keep large and equal spacing.

12. The distance between wiring and wires should also be uniform, equal and maximum.

13. The connection between wires and pads should be too smooth to avoid small sharp corners.

15. The common ground wire of printed wire shall be placed on the edge of PCB as far as possible. Copper foil shall be kept on PCB as much as possible to make shielding effect better than long grounding wire. It will also improve the transmission line characteristics and shielding effect, and also realize the function of reducing the distributed capacitance. The common grounding of the printed conductor is preferably formed into a loop or network, because when there are many integrated circuits on the same PCB, the ground potential difference is generated due to the limitation of the pattern, which leads to the reduction of the noise tolerance. When a loop is formed, the ground potential difference decreases.

16. In order to suppress noise, the grounding and power modes shall be parallel to the flow direction of data as much as possible.

Multilayer PCB can use several layers as shielding layers. The power layer and ground plane can be considered as shielding layer. It should be noted that the general PCB design layer and power supply layer are usually designed in the inner or outer layers 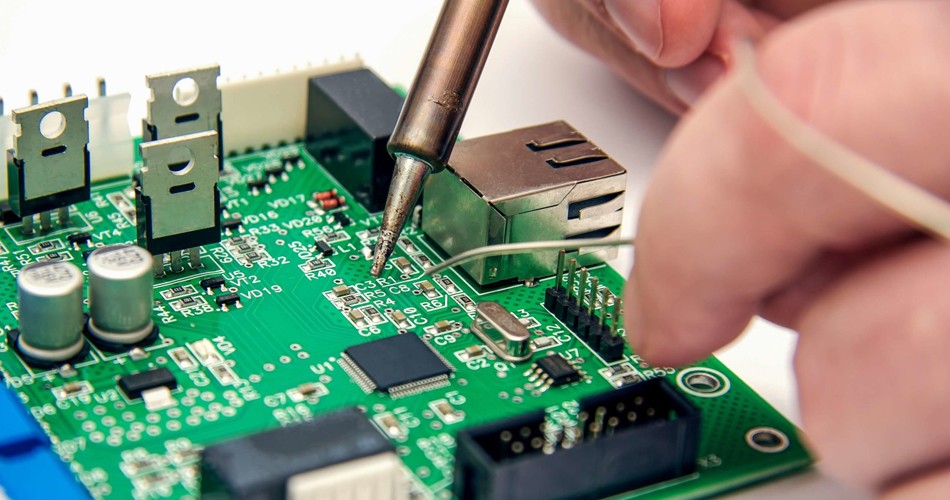 Some knowledge of assembly process in SMT processing plant