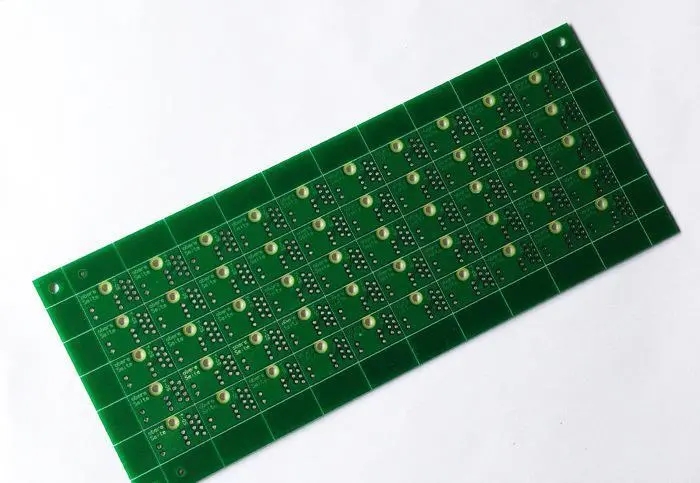 2. When the exposure energy of wet film is low, the wet film will not be fully cured, and the ability to resist electroplating pure tin will be poor.

3. The wet film pre baking parameters are unreasonable, and the local temperature difference of the oven is large. As the thermal curing process of photosensitive materials is sensitive to temperature, low temperature will lead to incomplete thermal curing, thus reducing the ability of wet film to resist electroplating of pure tin.

4. The ability to resist electroplating pure tin is reduced without post local/curing treatment.

5. The plates from electroplating pure tin must be thoroughly cleaned with water. At the same time, each plate must be inserted into a shelf or a dry plate. No stacking is allowed.

3、 Causes of "Impregnation" Caused by Solution Problems and Improvement Measures

②。 The current density shall be controlled within the allowable range;

③。 The control of liquid medicine composition, such as stannous sulfate and sulfuric acid content at the lower limit, will also be beneficial to the improvement of "infiltration plating".

3. Some pure tin polish agents are prone to "missing plating, infiltrating plating, blackening" or even "brightening" of the line edge on the wet film;

As the formula of pure tin polish generally contains organic solvent, while the wet oil film itself is composed of organic solvent and other materials, the two are incompatible, especially reflecting the "shine" at the edge of the line.

Factors related to the "brightening" of line edges:

4. The thickness of wet oil film of silk screen is uneven (the thicker the oil film is, the easier it is to "shine");

6. Quality of acid degreaser for pretreatment (selecting a good acid degreaser not only enhances the water washability of the solution, but also greatly reduces the probability of residue on the copper surface after oil removal);

7. Excessive tin polish in the plating solution (excessive tin polish will cause organic pollution in the plating solution. In order to prevent the wet film tin plating plate from polluting the tin cylinder with the increase of production capacity, 8-hour carbon core filtration is conducted every half month, and 5ASF, 10ASF and 15ASF current densities are used for electrolysis for 5 hours, 2.5 hours and 0.5 hours respectively every week);

Therefore, some bad problems are actually caused by the inconSPIcuous details of a process. As long as you consider them from multiple perspectives, you can find the key to the problem and solve it.

The good quality of wet film is very beneficial to reduce the "brightness" of the line edge, but it cannot be completely eliminated. In addition, the oil film that is more suitable for making pure tin plate is not necessarily a good oil film. Here is a brief introduction to the quality characteristics of the wet film:

2. Some wet films may indeed play a role in reducing the "brightening" problem at the line edge, but it is relatively difficult to remove the film. This kind of wet oil film is not suitable for liquid medicine with a wide range of current density operations. Slightly high current density is likely to cause problems such as "infiltration, film clamping, blackening" and even breakdown of the oil film.

① Purpose and function: Pure tin is mainly used as the metal anti-corrosive layer to protect the circuit etching;

② The bath solution is mainly composed of stannous sulfate, sulfuric acid and additives; The stannous sulfate content shall be controlled at about 35g/L, and the sulfuric acid content shall be controlled at about 10%; Tin plating additives are generally added according to the method of kiloampere hours or according to the actual Production board effect; The current of tin electroplating is generally calculated as 1. 5 A/square decimeter times the electroplating area on the plate; The temperature of the tin cylinder is maintained at room temperature. Generally, the temperature does not exceed 30 degrees, and most of it is controlled at 22 degrees. Therefore, it is recommended to install a cooling temperature control system for the tin cylinder in summer because of the high temperature;

③ Process maintenance: timely supplement tin plating additives according to kiloampere hours every day; Check whether the filter pump works normally and whether there is air leakage; Wipe the cathode conducting rod with a clean wet rag every 2-3 hours; Regularly analyze stannous sulfate (once/week) and sulfuric acid (once/week) in tin cylinder every week, adjust tin plating additive content through Hall cell test, and timely supplement relevant raw materials; Clean the anode conducting rod and electric joints at both ends of the tank every week; Use low current 0 every week. 2? 0 5ASD electrolysis 6? 8 hours; Check whether the anode bag is damaged every month, and replace the damaged bag in time; Check whether there is anode mud at the bottom of the anode bag, and clean it in time if there is; Continuous filtering with carbon core for 6? Every month? 8 hours, and low current electrolysis for impurity removal; Determine whether to require major treatment (activated carbon powder) according to the pollution condition of the tank liquid every half a year or so; Replace the filter element of the filter pump every two weeks;

④ Large processing program: A Take out the anode, take down the anode bag, clean the anode surface with a copper brush, wash it dry, put it into the anode bag, and put it into the acid tank for standby B Immerse the anode bag in 10% alkali solution for 6? 8 hours, wash and rinse dry, then soak in 5% dilute sulfuric acid, wash and rinse dry for standby; C. Transfer the tank solution to the standby tank, and press 3 ° C? 5g/L slowly dissolve the activated carbon powder into the bath solution. After the solution is completely dissolved, adsorb it for 4-6 hours. Use 10um PP filter element plus filter aid to filter the bath solution into the cleaned working tank, place the anode, hang it into the electrolytic plate, and press 0. 2-0。 5ASD current density low current electrolysis 6? 8 hours, D After chEMIcal analysis, adjust the content of sulfuric acid and stannous sulfate in the tank to the normal operating range; Add tin plating additives according to the results of Hall cell test; E. Stop electrolysis when the color of the electrolytic plate is uniform; F. Trial plating OK;

Circuit board manufacturing, circuit board design and PCBA processing manufacturers explain to you the defects of PCB electroplating pure tin.

Six methods to reduce the defect rate of automotive PCB