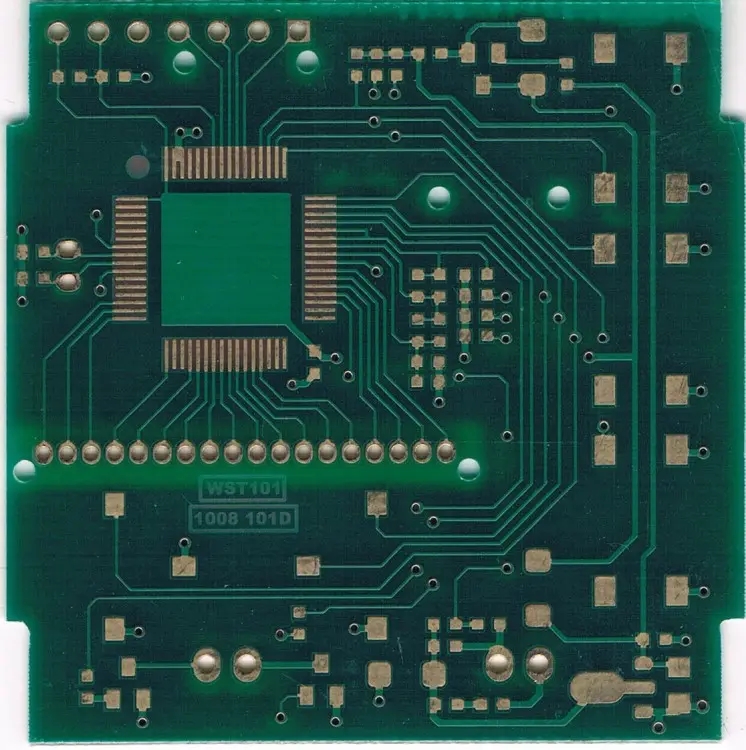 Do you know what the gold finger lead is?

What role does it play on PCB?

Can the short fingers on the long and short golden fingers have lead wires?

The customer didn't understand. Although the factory did understand, it didn't clean the lead wires. What would happen? Please listen to me.

A few floating clouds cannot cover the charm of the night.

Half a bright moon, sprinkles the slightest sense of coolness.

It's time for the factory to have a midnight snack again, and the workers are going to replenish their energy.

The lights in the workshop basICally went out, and suddenly a figure floated in like a ghost.

A little while later, the light in front of an operating console CAMe on, which is the only light source in the workshop at present.

There is a blurry boundary between the darkness and the light around, and the night is more and more strange.

Under the pale light, she picked up a cold sharp knife, which reflected cold and dazzling light under the light.

She lowered her head, raised her eyebrows slightly, closed her mouth tightly, stared at the things below. The muscles on the face are too tight, which causes the powder of some coSMEtics to fall off from the SMAll face and float around the light.

The air seemed to solidify at this moment, and she just kept staring at the things under the lamp.

It feels as long as a century.

Suddenly she moved, and saw her hand slightly raised, the cold light flashed, the knife fell, and a golden light flashed.

All the lights in the workshop turned on in a flash.

She slowly turned her head, stared at the workmates who came in and said, "I succeeded."

"Really", everyone gathered around in surprise.

"How did you do it?" everyone asked curiously.

Outdoor leaves fall in succession, stars are rare and the moon is bright.

The room was filLED with laughter.

The customer, Mr. Zhang, didn't sleep very well this night. It is reasonable to say that the board will be handed in tomorrow. He should be excited after so many busy days, but he always feels inexplicably upset. Especially at night, he always has some strange dreams, such as Shaolin Wudang Taekwondo, sweeping a large area with a stick and picking a line with a gun. I don't know what happened. Anyway, he practiced Chinese Kung Fu this evening. The key is to get excited. He sat up from bed and exchanged his hands. He didn't fall asleep until his wife got up and slapped him on the bed.

In this way, the day's work began.

"Ruyan, you designed the gold finger board for the customer last week. How did the customer do in their factory? Did you test it? What was the specific effect? Did you rEMInd him that this board is a package of long and short gold fingers? Short fingers can't take leads when making boards."

Suddenly, Mr. Zhao, like a ghost, came to Lin Ruyan.

"Ruyan, how do you remind customers“

Lin Ruyan looked at the face of Mr. Zhao, and his thoughts flew to the night three days ago. It was about eleven o'clock in the evening. The customer, Mr. Zhang, called and said, "A few days ago, the factory sent an engineering problem. Because this board is a long and short gold finger, the delivery date was quite urgent. In order to shorten the processing cycle, the board is now online. Please accept the residue of the short finger lead.

I didn't think much about it, so I agreed to the factory's proposal.

Now that I've remembered this question, I'd like to ask you how your company normally does it. “

Lin Ruyan said at that time, "We usually need to remove the gold finger lead. The elder martial brother trained us before.

What role does the gold finger lead play?

The gold finger needs to be inserted and pulled, so there are requirements for the thickness and hardness of gold. In order to meet this requirement, the area of the gold finger is usually processed by gilding. In order to gild, there must be current. This lead is led out from the front end of the gold finger to pass through the board edge and conduct current to complete nickel and gold plating. After gold plating, the lead wire has completed its mission. Usually, the factory tries to remove it, especially the lead wire with long and short gold fingers.

Why should PCB be made into long and short golden fingers

There are also some devices. For example, the four pins of the USB interface are different in length. One of the left and right long golden fingers is connected to the power supply and the other is grounded. The two short fingers in the middle are responsible for data transmission. In this way, when the USB stick is inserted into the machine, ensure that the power is turned on before data transmission, which is also for the normal access and protection of the equipment. If the long and short golden fingers are made into equal length golden fingers, the protective effect will be lost and reliability problems will occur.

After hearing this, Zhang Gong, the customer, suddenly realized, "The long and short golden fingers are used for this purpose. Alas, I will remind the factory later that it is not necessary to make equal length golden fingers."

As soon as Lin Ruyan finished talking about the communication process with customers, the senior brother said:

"Then ask the customer if he has changed. Customer Z is very busy and works overtime with us for this project. Although he said that it is not our company's board making, he should remind the customer not to forget this matter. It is really easy to have problems later“

"Well, I'll call Zhang Gong to confirm that this board has cost me and Zhang Gong a lot of effort."

Thinking of the hard years of designing this board and the good cooperation of Zhang Gong, the customer, Lin Ruyan quickly picked up the phone. Zhao Tech stretched his neck and listened attentively.

"Zhang Gong, what's wrong with your long and short golden finger project? The short finger lead has not been retained."

"Oh, Ruyan, don't mention it. After asking you this question, I answered the phone and hurried to deal with other things. I forgot. Later, I remembered several days later. When I went to the factory, they reported that the board forming process had been completed and the gold finger lead had not been removed. I communicated with the factory and asked them to find a way to remove it. The factory said that they had advanced technology and could remove it during FQC inspection“

"At present, I don't know. The factory said it was confidential. Ruyan, I won't tell you first. Maybe it's my goods. I'll go and have a look first, and wait for my good news later."

Lin Ruyan hung up the phone and looked expectant, wondering what advanced technology the factory had to remove the gold finger lead.

The process flow of etching leads with chemical solution needs to add secondary dry film to protect the circuit inside the board and the gold finger position, and then etch the leads. It takes two more days for the process flow. Now this factory has special processes, so it's not easy to think about it. Lin Ruyan also admires this Pcb factory inexplicably.

When one works hard, time will pass quickly. In a twinkling of an eye, two hours have passed.

Lin Ruyan stopped the work at hand and was about to get up and stretch when the phone rang.

She quickly picked up the phone.

"Like smoke, the factory has damaged the golden finger."

How did it go wrong? So the customer told a sad story in a low voice.

The process manager of the factory said boldly: "Zhang Gong, don't worry. We have a magic skill to go to Golden Finger Lead. We have a strange woman here. Go to Lead. God can help you with magic skills. I guarantee your satisfaction."

The process manager was also very attentive, so he arranged for his colleagues on the evening shift to deal with this matter, so the strange woman came on the stage.

Looking at the picture below, I can't help thinking that everything in the world can't stand the radiation of a magnifying glass, and PCB boards are no exception.

The Xianv's sabre technique is good, but it's a pity that she's a little heavy handed. The circuit board manufacturer, circuit board designer and PCBA processor will explain to you what the role of the gold finger lead on the pcb circuit board is.

Explain the warping, arching, twisting and sagging of PCB

What HDI boards are introduced by circuit board manufacturers