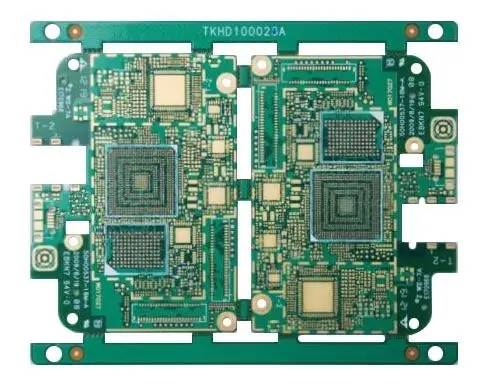 How hard you said at the beginning, how many tears will flow behind you. The reality will surprise you with a loud slap, which will make you lost and become a Buddha on the spot.

Late at night, Zhao Erhu was awakened by the telephone of the factory PMC in his sleep.

The PCB in a hurry to go online was abnormal when checking the components.

There is no window at the grounding point of QFN, but the components are grounded for heat dissipation.

Zhao Erhu, who had just been woken up, was even more confused.

Zhao Erhu couldn't figure out how a good PCB could miss the window until he hurried to the factory workshop and saw the board in front of him. He bit his finger. It hurt. Only then did I believe that what I saw was not a dream, but a reality.

It's not yet light, so we have to hurry to put the board online.

Call the CAM engineer of the PCB factory who is on duty 24 hours a day to confirm the situation.

After confirmation, the factory engineer told Zhao Erhu that the received PCB file was not opened here, and it was normally made according to the file.

Zhao Erhu was confused on the spot.

A little sober, he quickly opened the original PCB file.

The factory made the board according to the GERBER document provided by him, and there was no problem.

It was not until Zhao Erhu picked up the scraper with trembling hands to scrape the ink on the bonding pad on the PCB that he remembered what the master had said before, that when PCB was being made, he should provide the steel mesh file to the factory for engineers to compare the abnormality. But because of his stubbornness, the board went wrong. Now that he has seen the results, he also understands the great efforts of the master. Reality will always give you a vivid lesson, and slap him from behind to wake him up.

In fact, when we design PCB, there are many exceptions such as missing windows, missing pads, and less steel mesh.

Now let's take a look at the crime scene.

The chip on the PCB board has no thermal pad. The customer said that the factory had painted green paint on the pads. Is that really the case

When we open the original PCB file designed by the customer, when the customer designs the PCB, the package of the pad here is not opened, so this pad is covered by solder blocking.

Case 3: The resistance welding window is lost, and the results are compared with the steel mesh layer and the line layer.

Case 4: The steel mesh layer has more holes, and the results compared with the solder mask layer

Case 5: The steel mesh is missed, and the results of the comparison between the solder mask and the line are shown.

If we provide the stencil file, CAM engineers can compare the circuit, solder mask and stencil according to the gerber file during PCB project production, so as to find abnormalities in a timely manner, find out the missing and make up the missing.

As shown in the case below, when the customer designs a PCB, a window is lost in the middle of the QFN device. If there is a steel mesh (patch) file for comparison.

In the PCB file, select the large pad in the middle of the IC in the box. The steel mesh layer (patch layer) has a design window, but the solder mask layer has not. Please confirm which way to make it.

Recommendation A; It is made according to the welding resistance layer and covered with oil.

Recommendation B; It is required to add a window, which is made according to the window.

Please select A or B.

The choice is very important, right or wrong. I believe that our PCB design engineers can make a clear choice at a glance.

After the event, he is as timid as a mouse.

Do not imitate Zhao Erhu when making boards,

Scratch with bare hands and cry in the air.

PCB manufacturing, PCB design and PCBA processing manufacturers will explain to you whether to provide steel mesh files to the board factory when we make PCB.

Electronic engineer: What's the difference between PCB and IC?

Explain the warping, arching, twisting and sagging of PCB